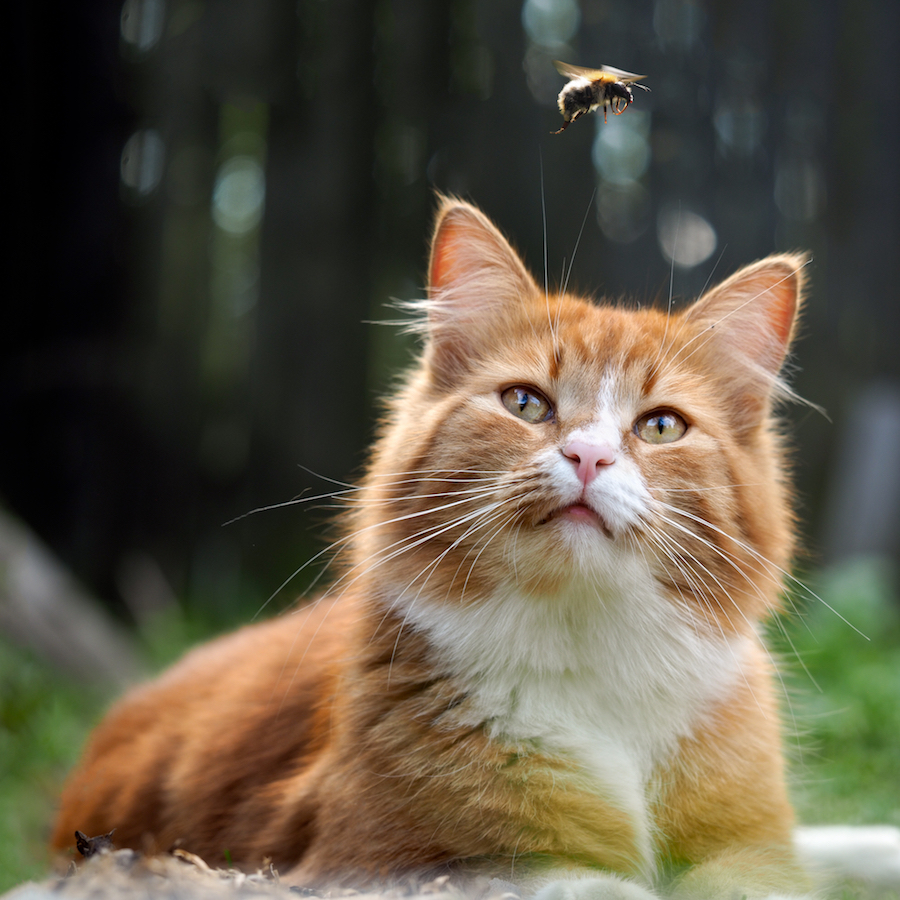 The greatest concern about pets and more so outdoor pets is an encounter with dangerous animals or insects. The  big question is ‘What to do when your cat is stung by a bee or wasp?’ Cats are known to be nosy animals. Just like the old saying curiosity killed a cat, cats are venerable to insect bite as they are always sniffing on anything they come across sticking their nose where it does not belong.

Their curiosity is often facilitated by their predatory instincts. In the process of their intrusiveness, they at times come across a beehive, a nest or even an anthill and disturb the habitats of the insects. As always insects do not like being disturbed and when this happens and as usual they retaliate.

There is nothing positive about a sting. Its not a recipe for a happy healthy cat. Usually the most stung part of the cat are the paws and the face because they are the first part to invade the habitats of the insect.

Outdoor cats aren’t the only cats at risk. Even the indoor cats are not immune to the sting of the wasp and bee. And just like humans if the sting is not treated then it is catastrophic and at times fatal.

First response advice; If your cat is stung several times on a single go, then contact the vet immediately. And if they are stung on their throat, then seek medical help as well. Your vet will probably guide you on how to attend to your cat or request you to take him or her to the vet hospital immediately.

What happens when your cat is stung by bee or wasp?

Bees and wasps, have complex venom that cause pain and histamine release. In addition, histamine itself is a component of many bee, wasp and yellow jacket venom. 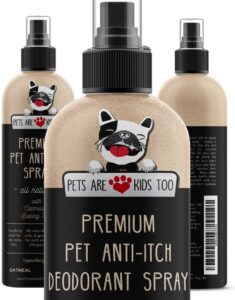 Histamine, in case you’re wondering, is a molecule that occurs naturally in the body. When it is released by the cells containing it, it causes swelling, itching and redness. Histamine is what makes a mosquito bite itch. Histamine is what causes noses to run and eyes to water in cases of hay fever. Severe release of histamine into the bloodstream can lead to vomiting, diarrhea, intestinal ulceration, low blood pressure, anaphylaxis and death.

The swelling of the skin makes it look raised causing a Wheal, and if the cats is stung several times then it forms several wheals.

Signs that your cat is stung by bee

The normal reaction of a bee sting on your cat can be, a sudden jump, or a loud cry to signal its hurt. Always a bee or a wasp sting is always painful. This are only visible at the time of the stinging.

Otherwise cats are perfect in hiding when experiencing pain. Some of the      signs may be subtle if exhibited at all. This makes it important to be keen with your cat if it seems unusual. More so, noticing the early signs, comes in handy if your cat is allergic to bees or wasps as in such a case the symptoms come suddenly and fast. Besides, allergic reaction requires emergency care.

Yowling or vocalizing more than usual

Pawing at the place they’ve been stung e.g. their face, mouth or throat

Dangers of being stung:

Most of the times a bee or a wasp stung is only painful and swollen a little. But then a cat gets stung several times, or gets stung on throat and nose then it poses a risky health issue. Besides if your cat is allergic then a single sting on any part of the body is risky.

Being stung inside the Nose or the throat.

Sometimes cat can be mischievous or accidentally take a sting of either a wasp or a bee. They might sting them on the tongue, in their mouth or throat. These stings are dangerous as the swelling can block the airway, choking your pet and preventing it from breathing. The sting can also become a discomfort for your cats feeding as it may be painful while biting, chewing or swallowing. Even a sting on the outside of the neck can be dangerous as the swelling can go both inside and outside. On the inside it can as well block the air passage.

Just like humans and other animal species, cats can be allergic to either the bee, or wasp venom. More so, several bites in an instance may have similar reactions even to a cat that is not much allergic.

If your cat has never been stung by a bee or wasp, here’s what you need to Know.

Not all allergies are created equal

A cat’s allergic reaction can occur within 20 minutes of the bite but can sometimes be delayed for hours. The sting venom usually has several ingredients and your cat might actually be allergic to one of them or a number of them. Cat’s allergic reaction to bee and wasp sting is on different levels, some stings just becomes a slightly swollen red mark. Other cats have their stings becoming swollen and accompanied by itching and invisible pain. This is a sign that the cat is allergic, only that its on the lower end.

However, there are other serious cases where the cat is highly allergic to the bee or wasp sting where it can develop;

The latter reaction can lead to fatal consequences. This is the worst-case scenario. Other possible allergic reaction to a bee sting are;

In cases of multiple stings, the above signs may as well be visible in the cat.

How to prevent your cat from being stung by a bee or wasp.

Don’t beat yourself up. At times no mater the steps you take, or the precautions you put in place, your cat will probably get stung by a bee ot wasp either way. However, as much as there is no guarantee for such prevention, there are a few steps one can take to minimize the chances of such an occurrence.

Always ensure in your place of living and your residential compound especially the sites where the cat likes spending time is free of any wasp nest and beehives. This will definitely minimize the number of wasps and bees around your residential place. More so, if by any chance you come across a wasp nest or a bee hive, within your yard, have them removed off the grounds safely by an experienced profession. While doing this, ensure your pets remain inside and doors and windows closed. In the process of removal of the nest and the hive should a bee or a wasp follow you inside, corral your pets, or cats, take them into a secure room and ensure the doors are closed and keep them closed until you kill the insect or draw it outside.

If your cat happens to have pushed the insect to a corner, first check to ensure what kind of insect it is, if it’s a bee or wasp then get your cat out of there immediately and move her into a room that is secure and close the door. From there confirm first where the cat is harmed or if it wasn’t.

After securing your cat, now move back into the room and get rid of the insect. If by any chance you are using the insect killer spray to get rid of the wasp or bee, then make sure that your cat is far off from the spray as it can make it sick or even worse.

In any incidence that involves your pet, including an insect sting requires you not to panic. you need to remain calm so as to take the next steps with care.

First you need to be quick to recognize if your cat has been stung. This requires you to access your cats change in behavior and be a little observant. It will probably start pawing at its face, chew at its foot, or even swell in any area of its body.

Quickly identify, the insect if it’s a bee or wasp. This is because cats can also suffer stings from other insects like spiders which can be fatal at times.

If the stinging originated from a wasp then ensure your cat is away from it since they do not leave the stinger and your pet can be stung again.

Examine your cat to know the area that it has been stung. If the cat is stung within the mouth throat or nose, then seek medical attention.

If the cat is stung in the rest of its body, and you can certainly remove the sting, then use the credit card method. Using the edge of a credit card or something that can offer a smooth but blunt end, gently scrape off the stinger. Kindly do not use your fingers or tweezers to pull it out as they pose a risk of rupturing the venom sack as well as pushing more venom into the wound.

Sooth the bite site by applying a paste of the baking soda and water. If the cat has been stung several times, it is advisable to use an ointment to reduce the irritation as a short term remedy, but kindly seek medical help as well.

To reduce the swelling, apply an ice-pack to the stung area for about 10 minutes. One can use a frozen towel or a bag of peas as well.

After the removal of the stinger and the soothing of the wound, keep a close eye on the cat in case of allergic response. If and when this happens, even when thy seem to be localized or mild kindly consult a vet. They will either advise you to take the cat in for check up or recommend an antihistamine medication, at a specific dosage which will reduce your cat’s reaction to the histamine released by the venom.

It is not advisable for you to administer the drug without the vet’s guidance as you can give the wrong dosage to them or the ingridients in the drug may not be friendly to your cat. Therefore, consult the vet to get the best medical drug for your cat and the right dosage.

In addition, it is not advisable to give your cat any over the counter drug, even the pain relievers. This is because the severe pain may signify an extreme reaction or even an allergy. This will often require an emergency visit to the vet.

Lastly discourage your cat from bothering the affected area further. If it’s the paw, get her or him to lie done so as not to bother it anymore. This should be the case wherever she is stung. This is because the Kitty may aggravate the swollen area prompting further swelling or/and damage delaying the healing and causing an infection as well.

Above all, give your cat fresh water and some food to keep up the energy. However, if your cat is stung in the mouth or throat this may be difficult for him or her. It will require you to be patient with him or her and feed them slowly.